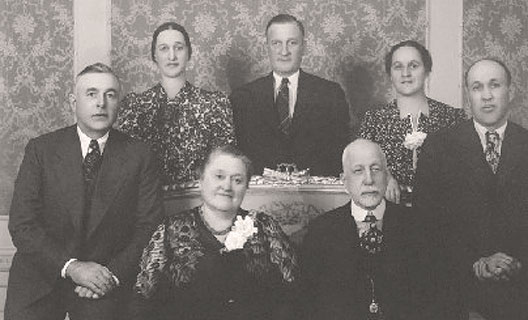 The Moss Family on the 50th Wedding Anniversary of P.B. and Mattie Moss

Preston Boyd Moss or P.B. Moss was born September 28, 1863, in Paris, Missouri, the son of David Hickman and Melville Hollingsworth Moss. He attended public schools and graduated with honors from Kemper Military Academy in Booneville, Missouri, in 1883. He attended Harvard University for a year and finished at Eastman Business College in Poughkeepsie, New York. After leaving school he worked a short time for his father in the bank before purchasing a chain of lumber yards. In 1892 he relocated to Billings, Montana.

Mr. Moss became very prominent in banking, organized the first dial telephone company in the area, founded a newspaper that was a forerunner of the Billings Gazette, and started a central heating plant and the Billings Utility Company. In association with H.W. Rowley, Mr. Moss developed the Billings Light and Water Power Company and the Northern Hotel. He assisted other prominent local citizens, such as I.D. O’Donnell, in development of local irrigation, the sugar factory, and the Billings Polytechnic Institute (now Rocky Mountain College). He started a bentonite toothpaste factory and a meat packing plant. In the early 1900s, Mr. Moss and T.A. Snidow ran 80,000 head of sheep bearing the Moss-Snidow brand and several thousand head of cattle. P.B. Moss served as a trustee of the school district and unsuccessfully ran as a Democratic candidate for U.S. Congress in 1922. P.B. was also the promoter of a futuristic city called Mossmain which was to be built approximately 10 miles west of Billings. The plans for Mossmain were drawn by one of the most brilliant architects and city planners in the world, Walter Burley Griffin, but when the war years reached here P.B.’s beautiful plans for his city dwindled and died.

Mr. Moss was a prominent Mason of Montana and a Grand Commander of the Knights Templar, affiliated with the Billings Consistory and Algeria Temple of the Majestic Shrine at Helena.

Preston B. Moss died February 1, 1947, after suffering a heart attack. He was 83 years old. He and his wife are interred in the family plot in Mountview Cemetery.

Mrs. Martha Ursula (Mattie) Moss was an artist, pianist, and mother of six children. Born in 1863 in Missouri, she traveled along the Oregon Trail with her family when just over a year old. At 16 she returned to Missouri to attend the Baptist College where she graduated. She studied art at the St. Louis Conservatory. On June 5, 1889, Mattie married Preston Boyd Moss, son of David Hickman Moss of Paris, Missouri. They came to Billings, Montana, with their two children, Woodson and Kula, on December 12, 1892. Two more children, Melville and Preston B. Jr., were later born at their residence on South 27th Street in Billings. The fifth child, David, was born in an apartment where the former Hart Albin Building is now located. The last of the six children, Virginia, was born in the mansion in 1903.

The children thought P.B. was stern and Mattie was Fun – the children’s nickname for her. Mattie and P.B. Moss celebrated their 50th wedding anniversary on June 5, 1939. Mattie died suddenly of a cerebral hemorrhage on November 6, 1951, at the Mansion. She was 87 years old. Many of her oil paintings and painted china are presently on display at the museum.

The oldest son, Woodson Jackson Moss, was born in Paris, Missouri, on April 17, 1890. He attended school in Billings, graduated from Phillips Exeter Academy in New Hampshire on June 23, 1909, and then attended Yale University. He returned to Billings and began his career in ranching. He married Abbie Deckert Cunningham of Forsyth, Montana, on December 17, 1929 and later adopted her niece. Woodson operated his cattle ranches on Pass Creek in Parkman, Wyoming, and in the Garvin Basin in Montana. He died at age 79 on May 21,1969.

The second child, Kula Moss Arnold, born December 29, 1891, in Paris, Missouri, came to Billings with her parents in 1892. Kula (pronounced “cullee”) is an Indian word meaning “pretty bird.” She attended school in Billings before studying at Roger’s Hall in Lowell, Massachusetts, and Dwight School for Girls in Engelwood, New Jersey, and attended the Semple Finishing School in New York City. One of her roommates in school was Margaret Porter, the daughter of the author known as O. Henry. Kula and Melville homesteaded in the Garvin Basin in southern Montana before Kula married John Bingle Arnold on January 11, 1923. They made their home at 137 Clark Avenue. Their only child, John Bingle Arnold, Jr., died at age seven. Kula died of a heart attack at her home on May 30, 1958, at the age of 66. Many pieces of her furniture were brought to the mansion to replace pieces that had broken or later removed, and several quilts and needlepoint items which Kula worked on are also in the museum collection.

Born on January 26, 1896, P.B. and Mattie’s third child, Melville Hollingsworth Moss, was a musician. She was first introduced to the harp at 9 or 10 years of age and studied under Martha Buchanan, one of the first music teachers in Billings. She also played the bass chello and the piano. After graduating from Billings High School in 1914, she spent four years in the New York area while studying at the Dwight School for Girls in Englewood, New Jersey. Traveling abroad was Melville’s favorite pastime. She preferred traveling by ship and took fourteen cruises including destinations in Africa, the Far East, South America, Europe (with Kula), and two trips around the world.

It is due to Melville’s protectiveness and care that the house has been preserved so nearly intact and has been registered as a Nation Historic Place. When the Moss family moved into the mansion, Melville was seven years old; she lived there until her death on November 2, 1984, nearly 82 years later. She never married.

The fourth child and second son, Preston Boyd Moss, Jr., was born in Billings on January 13, 1898. He graduated from Billings High School and also attended business school in Billings. During World War I Preston Jr. served in the Army Medical Corps but never saw action. His troop’s ship was crossing the ocean when the Armistice was signed on November 11, 1918, so the ship turned around and came home. Preston worked for the Northern Pacific Railroad and Pullman Services from 1924-1965 when he retired. He married Minnie Anderson of Murdock, Minnesota and built a home at 2511 Longfellow. They had no children. Preston Jr. died on August 21, 1971, at 73 years of age. Minnie died in Billings on January 1, 1988.

David Hickman Moss III, Mattie and P.B.’s fifth child, was born in Billings on February 8, 1900, and attended Billings Public Schools before enrolling in Phillips Exeter Academy in New Hampshire in 1918. In 1920 he entered Yale University where he studied for two years before coming back to work on his brother Woodson’s cattle ranch in Parkman, Wyoming. David later operated the Moss Implement Company in Billings, selling farm implements, until his retirement in 1956. He married Marjorie Powers in Hardin, Montana, in January 1929. They had one daughter, Marilyn Moss Castleman, who currently resides in Arizona. David died August 28, 1958, at 58 years of age. The Billings Preservation Society completed the purchase of the Moss Mansion from Marjorie and Marilyn and Preston’s widow, Minnie.

The sixth child, Virginia Moss, was born in the Mansion on February 14, 1903. At the age of five, Virginia died of diphtheria on April 2, 1908. Because of her sunny disposition, her brothers, sisters and playmates considered her their favorite. She was beloved by all.

Tours will not be offered from January 10th through February 16, 2022. During this time we will be performing annual cleaning and maintenance. Private tours and events will be considered on an individual basis depending on availability. Tours will resume on Thursday, February 17th at noon; days and times can be found HERE.

Guided Tours without a reservation
Friday and Saturday:  1 pm

A wonderful place to visit. If you have the time go. Just go.